Leave us your contact details and we will get back to you.

We do not send spam. Your personal data will be safe with us.

A BIOTOPE OF WATER, STONE, COLOURS AND SCENTS 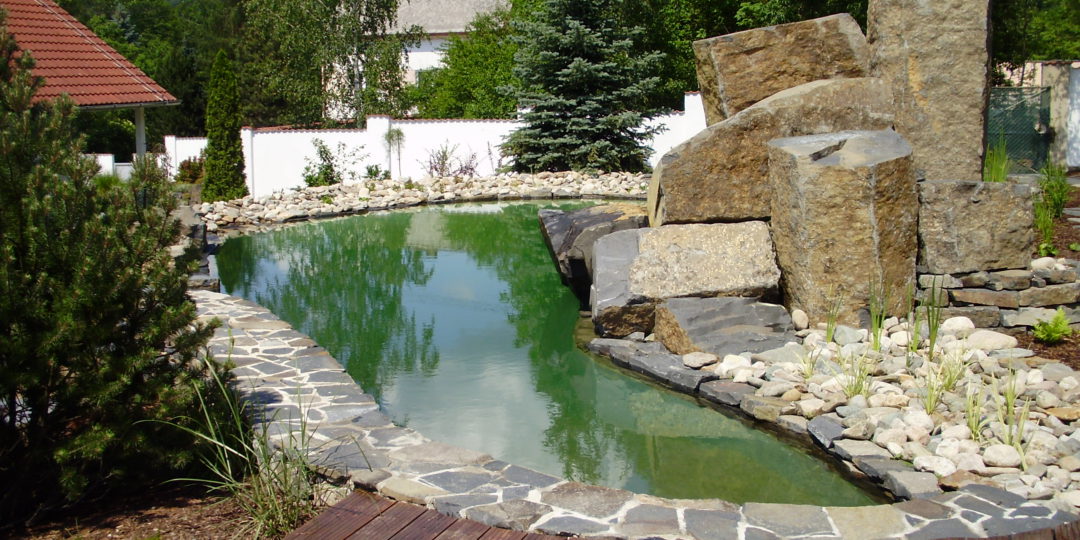 A BIOTOPE OF WATER, STONE, COLOURS AND SCENTS

Mr. Barták, how was the challenging work born?

At the very beginning there was a customer who wanted to build a water garden. The water element therefore played a major role and had absolute priority over everything else. The customer reportedly had no time left for a seaside holiday – and therefore wanted to move the water into his garden. The project was developed and implemented over a full four years, continuously focusing on the element of water flowing over the stone cascade. 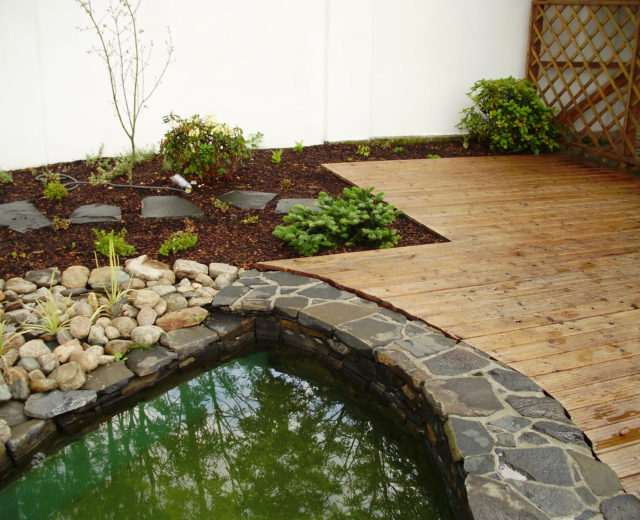 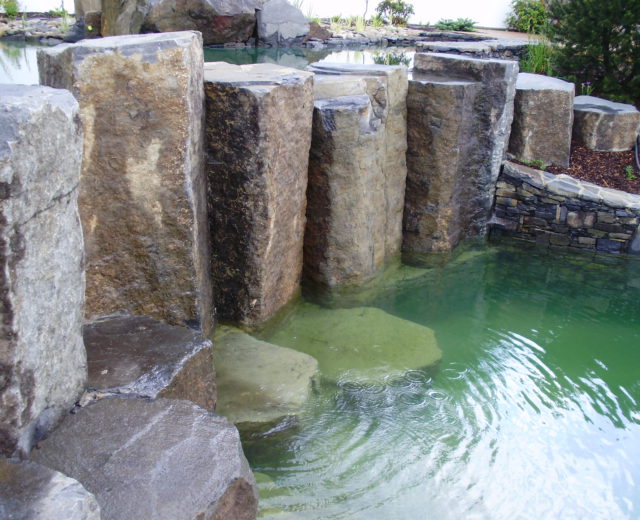 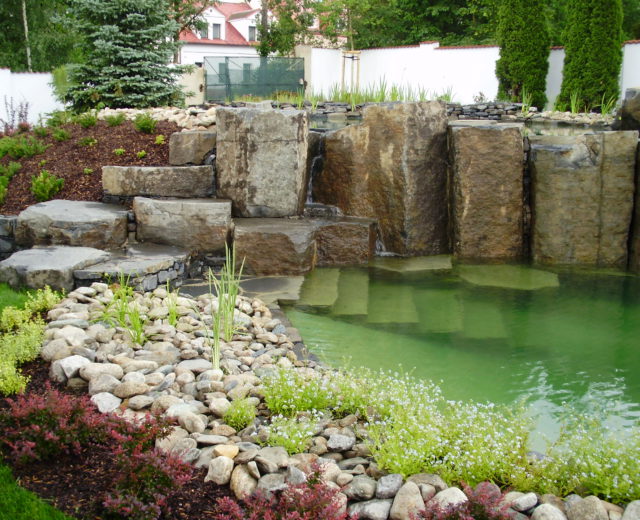 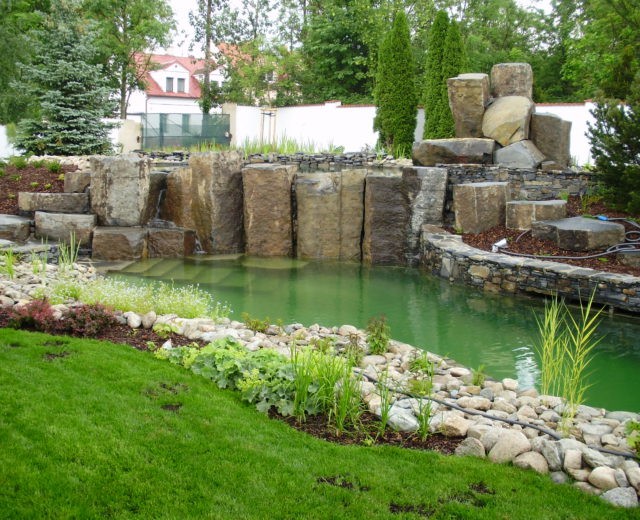 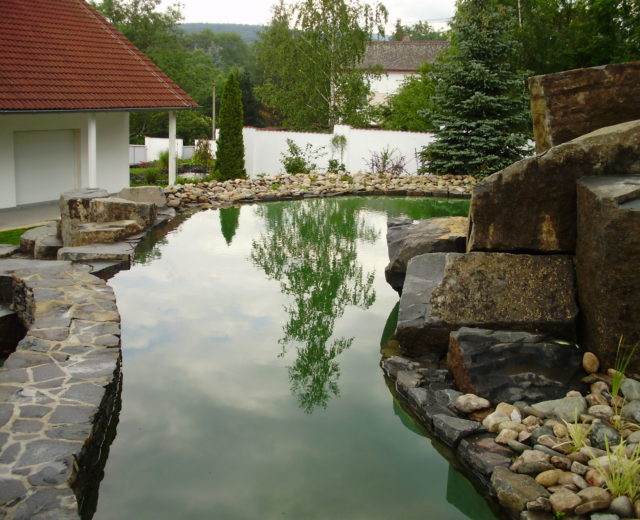 What are the individual pieces of this complex puzzle?

The basis of the whole biotope is a root cleaner, taken from the production of Austrian and German architects, but adapted to the conditions of the North Bohemian location. The changes have forced a new calculation of the volumes of duckweed and stone rubble, and the cleaning regime has been fixed at 10-12 hours a day. On the technical side of the construction, we first had to build a concrete skeleton on a clay base; all the technical and decorative elements, including the stone blocks, are built on this monolith. The system is operated by two pumps, dedicated to filtration, while another powerful pump serves the water element. As for the natural stone, we used basalt from the Dubičná u Zahrádek and Soutěsky quarries. The selection of the monoliths, especially the large ones, was carried out directly at the quarry and stacked on site by crane in several stages and by a technique using special lashings.

However, the large-scale habitat is not your only realization on this property. Just beyond the entrance, one comes across another work of water, greenery and natural stones…

In the lower part, before the construction of the biotope, we addressed the client’s request to stretch the water element into the entrance part of the property and to create a flowing element there as well – a waterfall plus five connected springs flowing out of the dry wall and symbolizing, by the way, the owner’s five wishes. 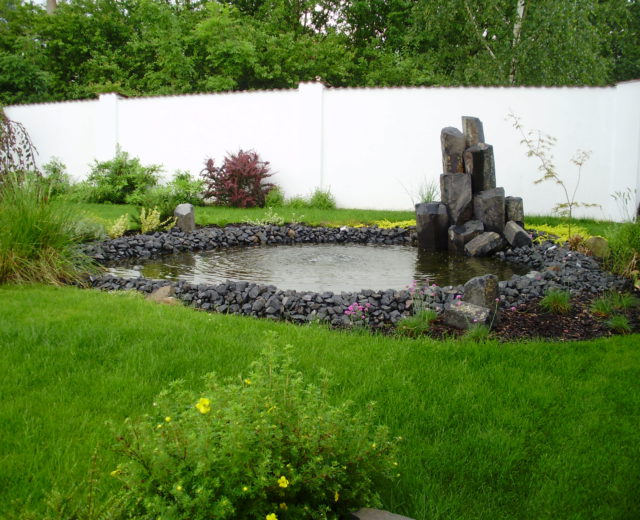 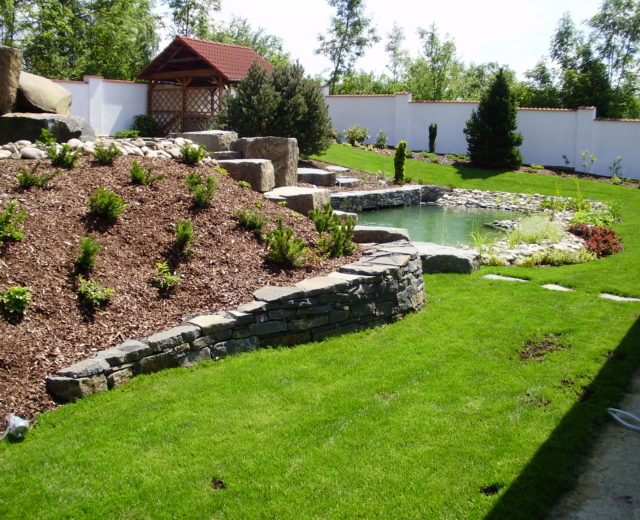 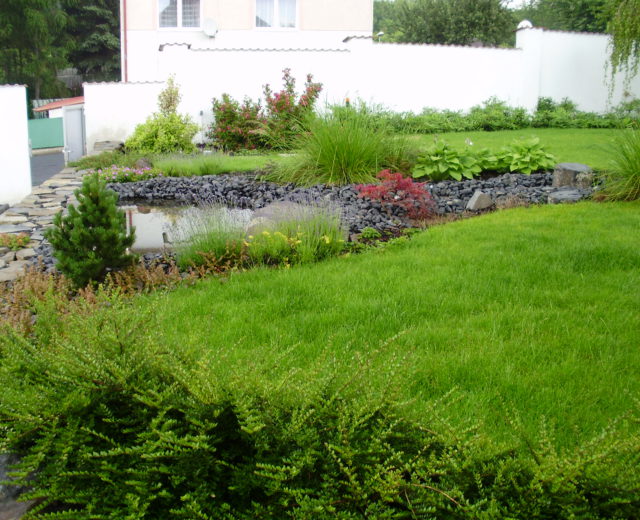 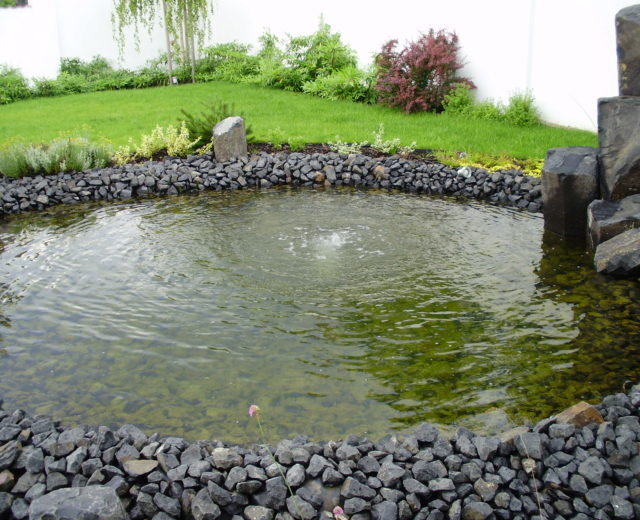 The company ZELENÉ KOLO, s.r.o. fulfils its credo of demanding orders. We would be interested in all the main pillars of your extensive and varied activities…

We deal with four core areas. The first is a separate section of design, both in landscape architecture and landscape and building production. The second section is garden design, including the implementation of gardens, and the third is the construction section closely related to garden production – including paving, dry walling, fencing and so on. The fourth area is public greenery – service for municipal and city authorities, tree replanting, lawn care.

As far as I know, each of your studies or projects is original, and in this context you also use the ideas of external artists and architects…

Externally, today we mostly cooperate with the landscape architect Ing. Drahoslav Šonský. The biggest inspiration we find abroad – at exhibitions, fairs, symposiums, etc. Perhaps my inventiveness also plays a part in the result; I try to instil in my colleagues that the result of their work should be characterised by feeling, depth and an understanding direct connection to the customer.

When creating gardens, it is essential to use locally sourced natural stone – if only for the natural framing of the work by the surrounding landscape. There is not much choice here in the north, but the offer is interesting. Sixty per cent of the dark basalt from the Dubičná quarries near Zahrádek and Soutěsky quarry is used; on the other hand, quartz porphyry from the Kubo quarry in Malé Žernosky near Lovosice is characterised by its light yellow colour. The necessary boulders, pebbles and pebble stones come from the Elbe sources; occasionally there are also Vltava stones, which are characterised by a lower lustre, i.e. a higher matt.

Can you give an example of the use of natural stones?

Recently, dry stone walls have been implemented on a large scale; we are responding to the wishes of customers who have an increased interest in this type of garden stone range. As they are not constructed using concrete, dry walls allow aesthetically interesting front walls to be interspersed with decorative plants.

Gabion walls made of stones clamped with wire mesh are now often created in the vicinity of modern architecture. Private homeowners do not often require gabions, but we approach such occasional implementations with all the more care.

When it comes to solitary stones, they definitely belong in the garden. We use the aforementioned cubo stone, i.e. porphyry from Lovosice, for this purpose; if neither basalt nor rhyolite suits the client, we import semi-dark and slightly cut limestone from neighbouring Germany. 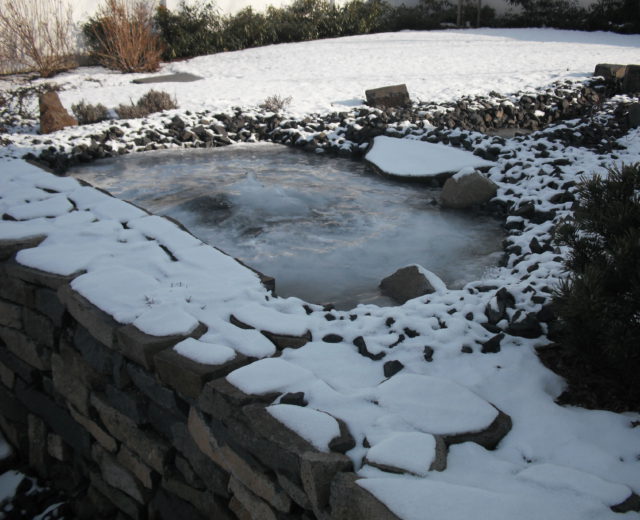 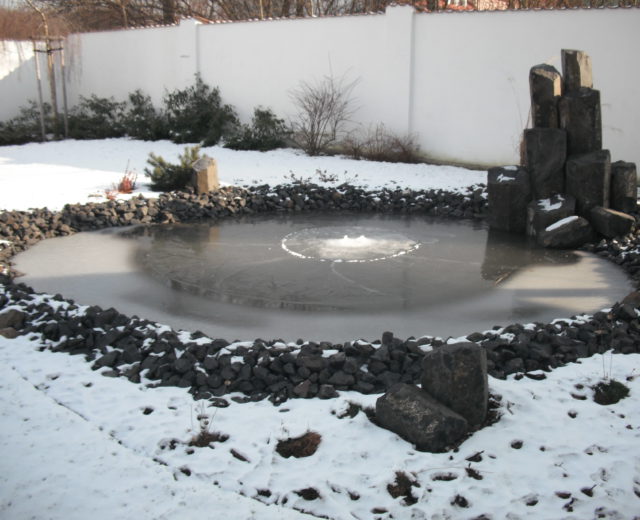 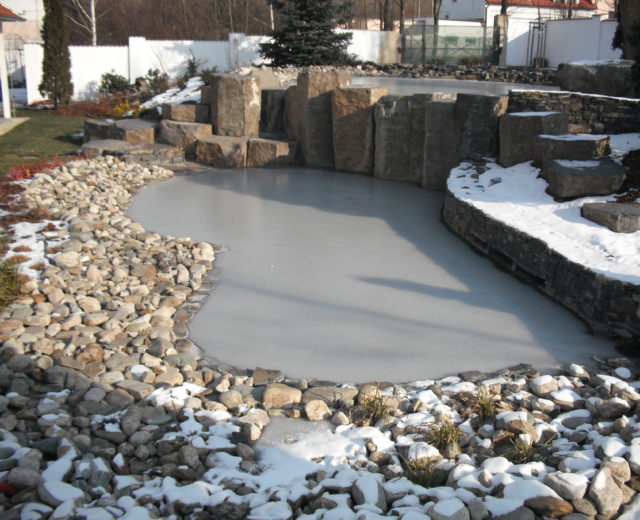 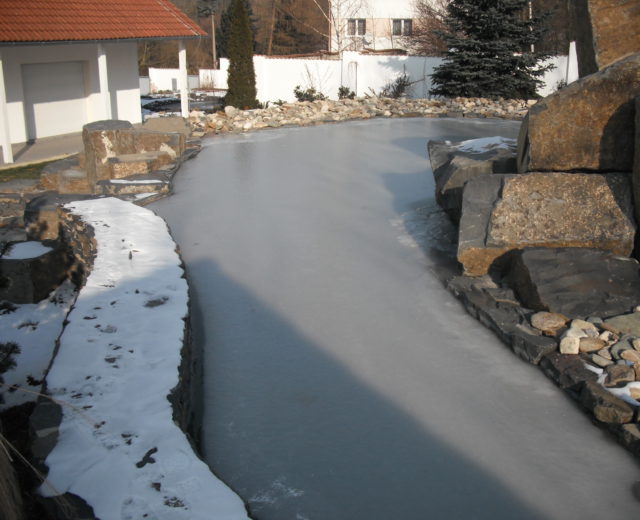 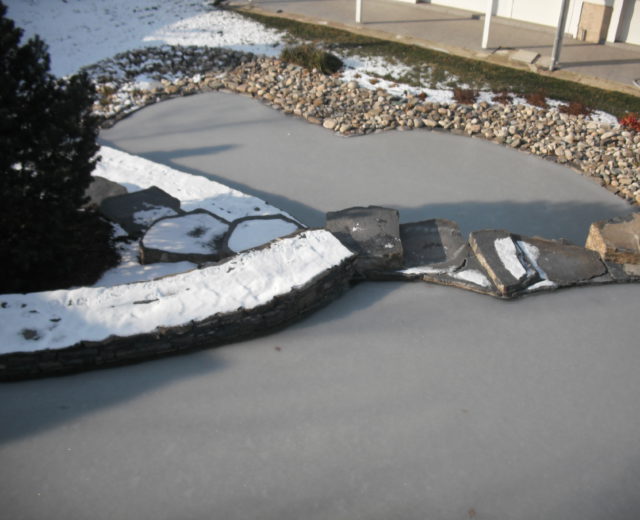 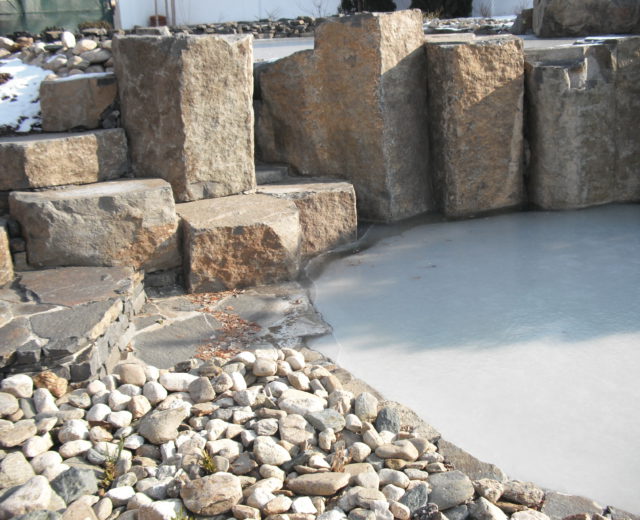 Your services don’t end with the project. What follow-up service can the customer count on?

At least during the warranty period, I consider service to be necessary, but it also proves to be useful in the longer term. For example, when it comes to greenery, it is necessary to return to the contract for a minimum of five years. But in some cases we come back for a sixth or seventh year and continually add to the garden. Only then is the purpose of the original project fully realised. And one more thing: with water projects, you need to winter well and prepare well for spring – and that’s not exactly easy either.

On your website I was interested in your projects for colour and fragrance gardens, atrium gardens and other special garden areas. How are such ideas born and how do you put them into practice?

The overall idea of the project stems, of course, from a consultation with the customer, from his wishes, likes, preferences, but also from his health indispositions, for example, various allergies, etc. Often people want to get as close to nature as possible; now, for example, we are creating a maple valley in the garden, related to the owner’s liking for this kind of greenery. Another time we had a task called a dry hillside, made of dry-loving flowers, grasses, heather, stone fences, stone rubble and so on.

What to add in conclusion to the attractive and meritorious activities of the GREEN WHEEL?

Once the vision of the garden has been fine-tuned and the project is complete, the most important phase begins. And for that you necessarily need a team of reliable and like-minded people. Without this, a good realisation, which is often completed on the fly, cannot be created at all. And such a team works for us.

Thank you for the interview.